Our work falls into the following:

The next ISJS conference will be held in Hungary in 2022. We usually organise a session at the international stratigraphy conference facilitated by ICS (STRATI). The last STRATI was in July 2019 in Milan.

One of the major aims of the ISJS is to define all the Global Stratotypes, Sections and Points (GSSPs) for the Jurassic. Most of the research work is completed through working groups for each of the stages. This section summarises:

A working definition is near the base of the Hybonoticeras hybonotum ammonite zone and lowest occurrence of Gravesia genus, and the base of magnetic polarity chronozone M22An.

Papers on sections that are also relevant include:

This proposed stratigraphic point coincides with the appearance over a short stratigraphic interval of several new ammonite taxa that delineate the base of the Subboreal ammonite Baylei Zone, the base of the Densicostata Subzone marked by the base of the flodigarriensis horizon, and, independently, the base of the Boreal ammonite Bauhini Zone. The main advantages of this locality are: the presence of a dual ammonite zonation marked by two extensively studied, well-preserved and very abundant groups of ammonites, and their preservation within a continuous section of ~120 m of open marine, fossiliferous, thermally immature mudrocks with no evidence of condensation or stratigraphic gaps. Dinoflagellate cysts, magnetostratigraphy and stable isotope data from the same section provide auxiliary markers. The thermal immaturity and unweathered nature of the strata in the Flodigarry section has permitted a direct Re-Os radiometric age of 154.1 ± 2.2 Ma to be obtained from the mudrocks 0.05 m below the proposed Kimmeridgian boundary. The corresponding stratigraphic level in the Submediterranean-Mediterranean successions is close to the boundary between the Hypselum and Bimammatum ammonite zones.

A full account is currently being prepared for publication in Episodes.

Any enquiries can be sent in the first instance to the ISJS chair Angela.Coe[AT]open.ac.uk

The convenor of the Kimmeridgian Working Group and lead author is Andrzej Wierzbowski, Faculty of Geology, University of Warsaw, Poland. awwierzb[AT]uw.edu.pl

The chair of the working group for definition of the base of the Oxfordian Stage is Kevin Page, Camborne School of Mines, University of Exeter, Penryn Campus, Cornwall, TR10 9FE, UK. K.Page[AT]exeter.ac.uk

Papers on sections that are also relevant include: Dubki section, Saratov area, Russia

The current working definition is the first occurrence of the ammonite genus Kepplerites (Kosmoceratidae) which marks the base of Macrocephalites herveyi Zone in sub-Boreal province of Great Britain to southwest Germany.

The most recent report of progress of the Callovian working group is published in Volumina Jurassic: Mönnig (2014).

The Global boundary Stratotype Section and Point (GSSP) for the Bathonian is defined at the base of limestone bed RB071 in the Ravin du Bès Section, Bas-Auran area, southern Subalpine Chains, France (43° 57′ 38″ N 6° 18′ 55″ E). The base of the stage and Zigzag Zone corresponds to the first occurrence level of Gonolkites convergens Buckman and coincides with the first occurrence of Morphoceras parvum Wetzel.

The Global boundary Stratotype Section and Point (GSSP) for the Bajocian Stage, formally defined at the base of bed AB11 of the Murtinheira section at Cabo Mondego, Portugal (40° 11′ 57″ N 8° 54′ 15″ W)

The position of the boundary coincides with the first occurrence of the ammonite assemblage characterized by Hyperhoceras mundum and related species (H. furcatum, Bratinsina aspera, B. elegantula). The boundary lies just below the nanno-horizon of the entry of Waunaueria communis and W. fossacincta, and closely corresponds with a reversal to normal polarity. scale. An Auxiliary Stratotype Point (ASP) is also selected at the base of bed U10 of the Bearreraig Bay section on the Isle of Skye, Scotland, as the complementary referencefor the palaeobiological key of the Bajocian lower boundary, i.e. the evolutionary transition Graphoceras–Hyperhoceras.

The Global Boundary Stratotype Section and Point (GSSP) for the Aalenian Stage is formally defined at the base of bed FZ107 in the Fuentelsaz section, Castilian Branch of the Iberian Range, Spain (41˚10′15″ N 1˚50′ 0″ W). The position of the boundary coincides with the first occurrence of the ammonite assemblage characterized by Leioceras opalinum and Leioceras lineatum and corresponds with a normal polarity interval.

The Global Stratotype Section and Point (GSSP) for the base of Toarcian Stage is proposed at the base of limestone Bed 15e at Ponta do Trovão, in the Peniche section (39º22’15’’ N, 9º23’07’’ W) (Lusitanian Basin, Portugal) located 80 km north of Lisbon.

The base of the Toarcian Stage is marked by the FO of the ammonite Dactylioceras (Eodactylites) simplex. Co-occurring species, which help to define the lower part of the Polymorphum Zone in the absence of D. (E.) simplex, include D. (E.) pseudocommune and D. (E.) polymorphum. The ammonite association of D. (Eodactylites) ssp. and other species e.g. Protogrammoceras (Paltarpites) cf. paltum, Lioceratoides aff. balinense and Tiltoniceras aff. capillatum is particularly significant for the boundary definition.

A full account is published in Bordalo da Rocha et al. 2016 Base of the Toarcian Stage of the Lower Jurassic defined by the Global Boundary Stratotype Section and Point (GSSP) at the Peniche section (Portugal), Episodes, v.39, p.460-481.

The Global Boundary Stratotype Section and Point (GSSP) for the base of the Pliensbachian Stage (Lower Jurassic) is at the base of bed 73b of Hesselbo and Jenkyns (1995) in the Wine Haven section, Robin Hood’s Bay, Yorkshire, UK (54° 24′ 23.9″ N 0° 29′ 44.5″ W). This level contains the characteristic ammonite association Bifericeras donovani Dommergues and Meister and Apoderoceras sp.

The Global Stratotype Section and Point (GSSP) for the base of the Sinemurian, the second stage of the Lower Jurassic, is exposed in the cliff north of East Quantoxhead, about 6 km east of Watchet, Somerset, England (51° 11′ 27.7″ N 3° 14′ 11.6″ W). The boundary level is 0.90 m above the base of British Geological Survey Bed 145 of coinciding with the first appearance of the genera Vermiceras (V. quantoxense, V. palmeri) and Metophioceras (M. sp. indet. 1).

A full account is published in Bloos, G and Page K.N. 2002. Global Stratotype Section and Point for base of the Sinemurian Stage (Lower Jurassic). Episodes v.25, p.22-28.

Hettangian and base of the Jurassic

The Global Stratotype Section and Point (GSSP) defining the base of the Jurassic System, Lower Jurassic Epoch, and Hettangian Stage is situated at the Kuhjoch pass, Karwendel Mountains, Northern Calcareous Alps, Austria (47°29’02″N/11°31’50″E). The Triassic-Jurassic (T-J) boundary is exposed at Kuhjoch West and at Kuhjoch East, and corresponds to the first occurrence of the ammonite Psiloceras spelae tirolicum.

Overlooking the Kujoch section in Karwendel near Hinterriss, Austria. The red arrow points to the GSSP for the Jurassic. Photo: Joachim Blau (12.6.2009).

The German Jurassic Subcommission visits the Kujoch section. The Triassic-Jurassic boundary lies in the Tiefengraben Member (red marls), about where the two people in the middle of the group are standing. The Golden Spike is now located on the other side of the ridge. Photo: Stefanie Mönnig (12.6.2009). 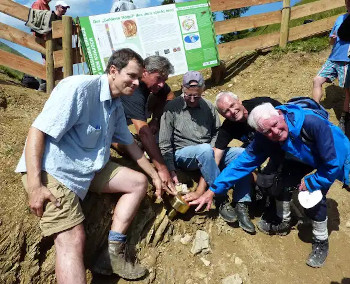 The „Golden Spike“, marking the base of the Jurassic System. József Pálfy (Chairman ISJS) and Stan Finney (Chairman ISC) on the left side are sitting in Triassic beds, while Axel von Hillebrandt, Leo Krystyn (both Hettangian Working Group) and Nicol Morton (former Chairman ISJS) on the right side have their feet in the Jurassic. The beds are overturned. Photo: Stefanie Mönnig (20.8.2011).